I Became a Web Developer Despite Others Telling Me I Couldn’t was originally published on The Muse, a great place to research companies and careers. Click here to search for great jobs and companies near you.

“You can’t be a programmer. You’re too creative.”

Christine Beaubrun, a web developer at Crew, heard this from two different people when she first contemplated a career in tech.

After spending a few years in the hospitality industry, Beaubrun didn’t feel satisfied with her career and decided to return to what she knew—art. It’s always been a passion of hers and what she earned her undergraduate degree in. So, she decided to go back to school, this time pursuing a master’s in design and technology. She had every intention of becoming a graphic designer.

As part of her application to graduate school at Parsons Paris, she created a digital magazine. It was while doing this that she developed a strong interest in tech. To complete the magazine, she used Adobe Creative Suite and also started to dabble in CSS, HTML, and JavaScript. To her surprise, she really loved using those tools. 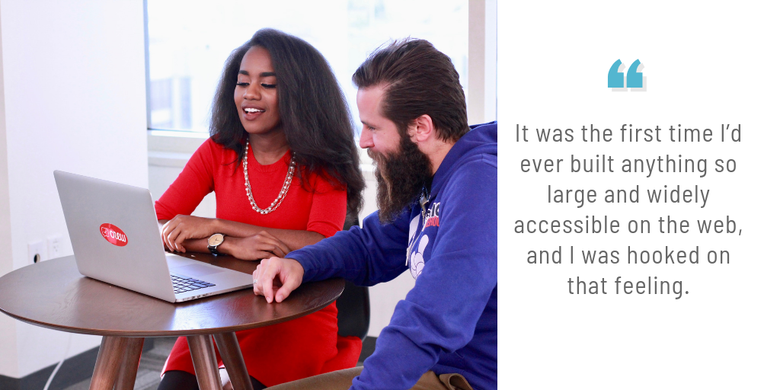 “It was the first time I’d ever built anything so large and widely accessible on the web, and I was hooked on that feeling,” Beaubrun shares. “It dawned on me—I should really be a front-end engineer because it combines my interests in art, graphic design, and hospitality (which, in this field, is the user experience).”

But, because she wasn’t fully confident she could pull this new dream off, she decided to “test the waters” and ask family, friends, and some of her colleagues for advice. And that’s where the naysayers—two co-workers who’d only known her for a few months when she was working in the hospitality world—come in.

“Their words inspired me to prove them wrong,” Beaubrun explains. “Plus, I knew the only way I could confirm with certainty whether I was ‘too creative’ or not was to give it a shot.”

So, Beaubrun left behind her plans to become a graphic designer and never attended Parsons. Instead, she enrolled in the Flatiron School Fellowship Program, where she dove into a five-month-long full-time program focused on helping students start a software engineering career. 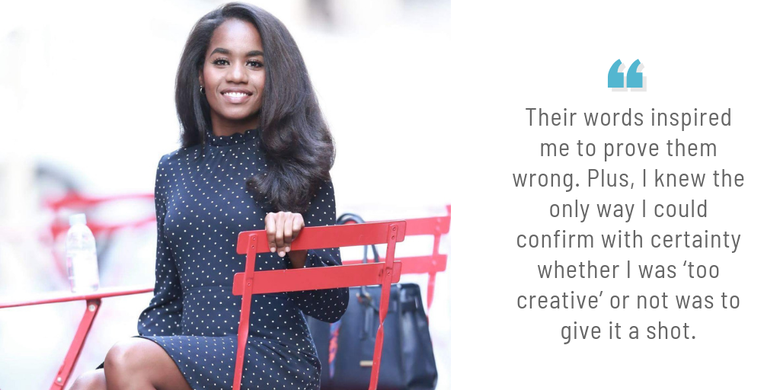 During her last month of the program, they introduced Beaubrun to a representative at Intel. Intel invited her to participate in their interviewing process, which, in addition to a phone screening call and standard interview, included a technical challenge. She completed all three components remotely since Intel was in California and, at the time, she was based in New York.

One month later, just half a year after she was told she couldn’t do it—twice—she got an offer to be a front-end engineer at Intel. She stayed there for two years before accepting a role at Crew, where she developed a custom data analytics tool that tracks page activity and writes code to build new features for the Crew app.

Beaubrun loves what she does and finally feels like she’s in the right field.

“I really enjoy talking through problems and figuring out what the best solution may be,” she shares. “When the design team sketches out a solution, I like to jump in and help determine what’s possible or what needs a little more work. From there, I love seeing the final draft of the design, coding it, and presenting it to the team.”

She loves being in tech so much that she became a member of /dev/color, a nonprofit organization focused on creating “environments where Black software engineers can learn from one another and hold each other accountable for reaching ambitious career goals,” she explains.

/dev/color, she says, has helped her move her career (and life) from the east coast to the west coast when she took the job at Intel, confidently transition from a large company to a startup, and be a better engineer overall.

All we can say is that it’s quite fortunate she ignored all those pessimists.