5 Careers You Can Get with that Computer Science Degree

There’s no doubt that technology is a pervasive part of society today. Which is why computer science isn’t going anywhere! In fact, if anything thanks to the disruptions of new technologies, businesses and governments need computer science experts now more than ever.

Let’s look at 5 of the careers you could land with a comp sci degree under your belt.

Every piece of information in the world today, is stored on a database. A database administrator or DBA, in charge of analyzing and evaluating data to determine the needs of users, and best practices for the business. A DBA’s role is one of the most varied computer science roles, and can include everything from the installation and configuration of new administrative software, to troubleshooting, performance monitoring, data recovery and even security.

If you love Rami Malek’s character on Mr. Robot, then you might be interested in a career in IT security and risk. Information security analysts not only create the systems which protect networks and websites from cyber-attacks and security breaches. They also get to test out how to break into them too! Of all the jobs, out there for IT professional, the need for security analysts is growing constantly, and their responsibilities are always expanding thanks to new threats from cybercriminals and the dark web. 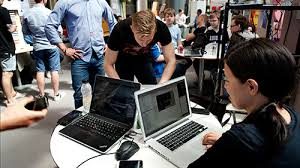 Like other forms of architecture, being a network architect is all about design. The only difference is network architects are designing the ways we communicate. Architects are needed for everything from a nation’s internet infrastructure, to specialized networks like intranet and extranets, often used by large institutions, like government bodies or big corporations. A network architect spends their time assessing the communication and data sharing needs of people and businesses, and make recommendations by evaluating the best products and services out there. They’re also who people rely on to solve problems and issues when they occur after a network is set up.

Software developers have garnered a bit of a reputation over the years as being aloof and difficult to work with. But being a member of a dev team is one of the most complex computer science careers. Developers are creating the programs and apps we use to perform specific tasks. Nowadays, there are developers who work on all sorts of platforms, including mobile. They’re responsible for everything, from Microsoft office to VPN software. Software developers conceive, build, test and maintain whatever they design, it’s a field that allows a lot of technical creativity, but you’ll need to be fluent in coding languages like java, python or ruby.

It’s not all coding languages and communication. If you’re looking for a more hands-on comp sci career path, hardware engineering might be the right fit. [When it comes to hardware in the 21st Century, it’s constantly evolving. Hardware engineers are responsible for every component of every device. Circuit boards, routers, graphics cards, batteries, and RAM. They design, build and test the parts that makeup every laptop, and smartphone. Like software developers, hardware engineers have to stay on top of emerging trends and developments in the field to allow them to keep creating the devices we use every day.